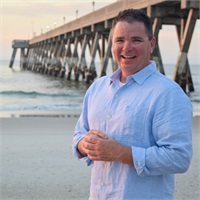 Michael grew up in Vanceboro, a small town in eastern North Carolina. During his childhood, he spent many summers working on his grandparent’s farm. Throughout this time, he learned valuable lessons about life, money, integrity, and most of all hard work! Michael recalls learning about the value of money at a young age. At ten years old, he opened his first bank account where he deposited his hard-earned summer wages. He immediately recognized this was not the way to build long-term wealth when he asked the banker how much he’d earn on his money over the next year. The banker handed him a lollipop and responded, “Not much, son.” This defining moment in Michael’s life sparked his interest in stocks and investments, and, unbeknownst to him, guided him toward a career path in finance.

In the early ‘90s, Franklin Life Insurance recruited Michael, where he spent five years marketing and selling securities. He then worked with IFG Securities for a brief stint, which ultimately let him to to join LPL Financial in July 2001. As the largest independent broker dealer in the U.S. at the time, he spent the next decade working with LPL, where he eventually met and joined forces with Brian. In January 2011, Michael and Brian co-founded RS Wealth Management, LLC which later became Hayden Royal of Wilmington in 2020. It is their goal to work together to serve their clients’ best interests and they are truly committed to making their dreams become realities.

In 1993, Michael married his fourth-grade crush, Deanna and they welcomed their beautiful daughter to the family in 2003. They later gained a beloved addition of a Boykin Spaniel “Cooper” into their life. When not working or spending time with his family, you can usually find Michael outdoors enjoying his love for off-shore fishing and hunting.

The Hudson family has been active members of Scott’s Hill Baptist Church since 1995 where they’ve enjoyed working with the youth group. In the community, Michael has served on the board of the Cape Fear Museum, where he’s held positions as Board President, Vice President and Treasurer. The Hudson Family is also annual supporters of Shave for Sean, a St. Baldrick’s fundraiser in the fight against childhood cancer. Michael is grateful for every opportunity he’s been presented and seeks daily direction in life from his Lord and Savior, Jesus Christ.