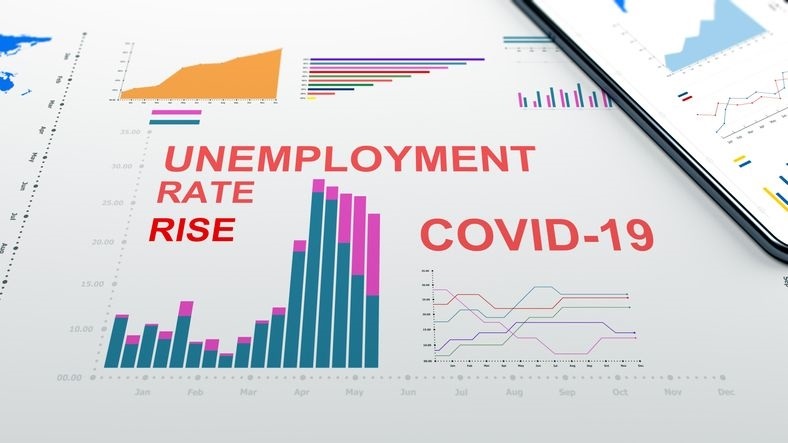 The major U.S. indexes finished the week mostly down after surrendering gains made early in the week. The markets turned on the news that initial unemployment claims rose for the first time in 16 weeks, a clear sign that the recent spike in COVID cases has resulted in another wave of layoffs.

The Dow Jones Industrial Average gave up 202 points finishing the week at 26,470, a decline of -0.8%. The technology-heavy NASDAQ Composite declined for a second consecutive week, ending down -1.3%.

Spiking COVID-19 Cases are Leading to a Higher Death Rate

It was only two weeks ago that total virus cases reached 3 million. Hard to believe more than 1 million cases in the U.S. have been recorded in the last couple of weeks!

During the same time, the stock market seemed to drift around looking for direction. Well, most of the stock market anyway - The Nasdaq managed to climb to new highs at the beginning of last week before hitting a three-week low on Friday.

The change at the end of the week centered around the adverse effects of the surge. Unemployment claims rose (more on this in the next section) as some states retreated from their reopening, sending workers back to the unemployment line.

The much-discussed death rate rose, as anticipated, with the higher case numbers. The question for weeks has been would the rise in cases lead to an increase in deaths? With the virus numbers spiking in the younger generations, the death rate, a lagging indicator, became a point of emphasis for both the naysayers and the alarmists. After all, the younger generations are "supposed" to recover.

According to an analysis done by the Wall Street Journal of the Johns Hopkins data, the average daily death toll over the last seven days has increased from 778/day to 825/day. I do not know if this is the smoking gun the alarmists were looking for, but I can tell you the concern from the clients I spoke with last week has heightened. The stock market performance on Thursday and Friday appears to show that these clients are not alone in their fears.

Let us end this section with a bit of good news and reason for optimism. Speaking to reporters, Adm. Brett Giroir, a U.S. Dept. of Health and Human Services official, said the seven-day rolling average for COVID-19 infections is lowering. As the guy who oversees the U.S. testing strategy, he hoped for a lower death rate in the coming weeks.

Jobless claims rose for the first time since the lockdowns in March to control the spread of the virus. Weekly new claims had fallen steadily from 6.9 million before stalling out around 1.3 million per week-- until last week.

The weekly claims number jumped to 1.4 million as the effects of increasing positive virus tests crept back into the economic data. Some areas of the country have shelved their reopening plans while other regions were forced to close businesses that had reopened. The stock market reacted negatively to the loss of business activity.

A word of caution – don’t automatically assume the unemployment rate will rise when released the first Friday in August just because the jobless claims are rising. Jobless claims focus only on people applying for unemployment benefits for the first time.

If the number of people collecting unemployment is shrinking at the same time claims are increasing, the two data points may cancel each other out. We will know more on August 7th.

The question to be answered is whether new hires and recalling workers is outpacing fresh layoffs. The stock market will be paying close attention, and so will we.

Senate Republicans Delay their Version of the Virus Relief Package

Lower death rates may be one positive stock market catalyst over the next several weeks, but a more publicized and expected boost may come from a new relief package. That is, if the Republicans can ever get on the same page so they can start negotiating with the Democrats.

The time crunch is due to the expiration (July 31) of the $600 per week supplement to unemployment benefits. Democrats chose the quicker, less complicated path and are hoping to extend the $600 per month benefit through the end of the year. Republicans have chosen the unenviable task of trying to figure out a way to discontinue the "moral hazard" created by the $600.

I know small business owners who have struggled to get their workers back. It is a tough decision for some workers who make more money not working because of the $600 per week than they would if they went back to work, including the savings on child care and more.

The idea behind additional unemployment benefits was not to disincentivize work.

I also know working families that have enjoyed this benefit. Many of them have been furloughed from work, but only for a week or two each month. They are working and collecting unemployment plus the $600 per week additional benefit. They did not need the money, so they either saved it or bought new furniture (seems to be the popular choice). Sitting around their new fire pit on their new patio furniture is fun, but I believe there are better uses for our tax dollars, even as that spending has helped others keep their jobs.

Republicans willing to tackle this issue are applause-worthy. Remember, Senator Graham brought this concern up when the first relief package passed.

Their ongoing debates on the issue may lead many to financial hardship or worse, a rushed, poorly executed fix for the created moral hazard of getting paid more to stay unemployed.

We do not need to trade one problem for another.

Nor does the stock market and your portfolio need a self-inflicted Congressional wound. Here’s to hoping all parties involved get this one right!